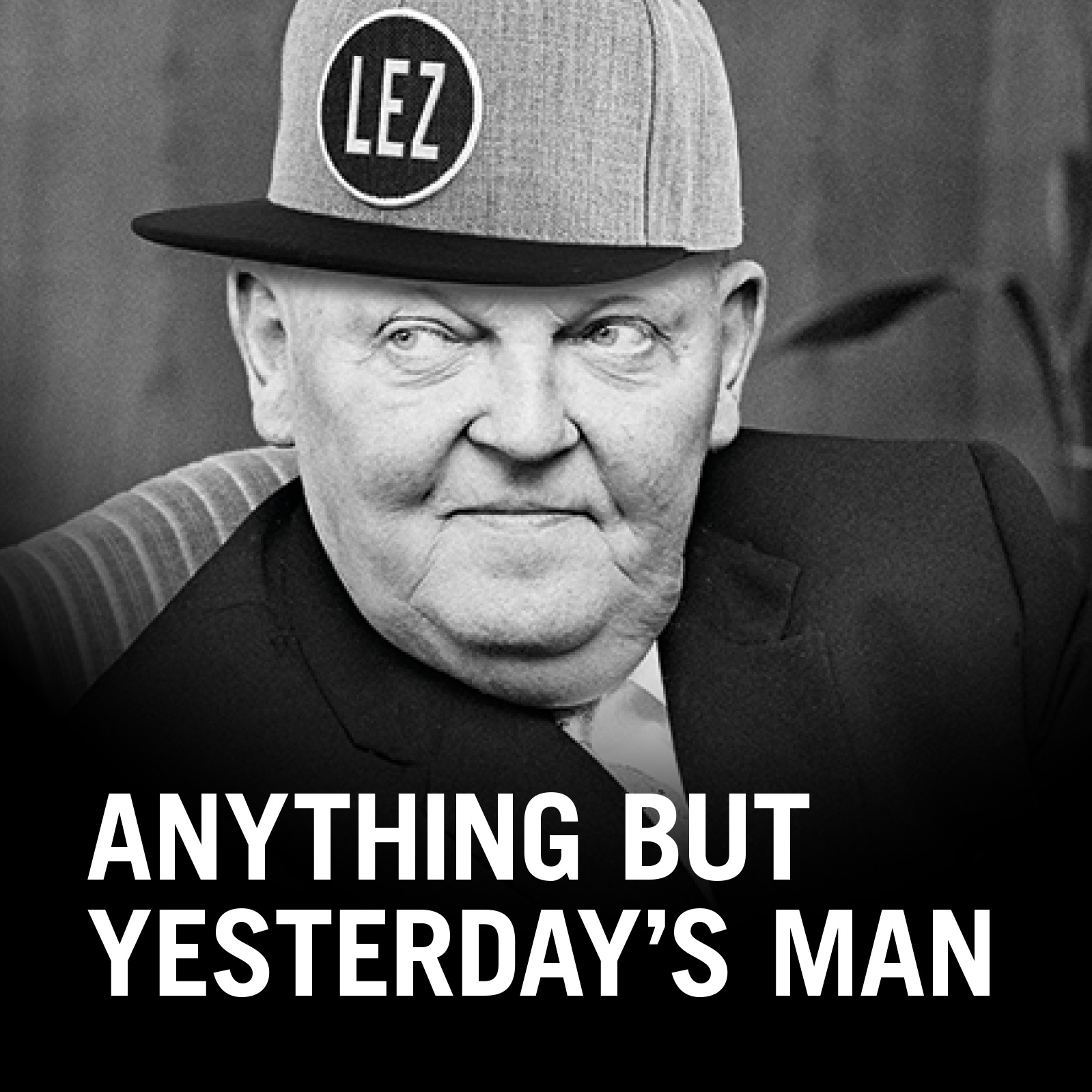 Ludwig Erhard is deeply ingrained in the collective memory of the Germans as the “father of the social market economy and the German economic miracle”. Born in Franconia in Fürth in 1897, he made a significant contribution to the design of the economic and social status quo as the German economics minister. 70 years after the Federal Republic of Germany was founded, as one of the key founding fathers, he is far from having been consigned to the past. Ludwig Erhard’s ideas are timeless and provide concise approaches to solutions for the economic and social challenges of the present and of those to come.

Ludwig Erhard was born in Fürth on February 4, 1897 to the Roman Catholic father Wilhelm Philipp Erhard, and his Protestant wife, Augusta (née Hassold), as the second of four children. All children were baptized Protestant. The Erhard family ran a successful business of linen- and woolen goods, fabrics, and tailor-made products. After suffering from polio, which resulted in a permanently deformed right foot, young Ludwig attended the elementary- and middle school in Fürth. In 1916, he completed his training in retail sales in Nuremberg. In the same year, and despite his disability, he volunteered for the fighting troops. As a gunner for the 22nd Royal Bavarian Field Artillery Regiment, he was badly wounded in Ypres, Flanders in 1918. In 1919, he left the military service as a corporal and officer cadet.

In December 1923, Ludwig Erhard married the economist Luise Schuster (1893–1975, née Lotter), who was four years his senior. The war widow brought daughter Lore into the marriage. Ludwig and Luise also had a daughter together called Elisabeth.

The family’s holiday home and retreat was the house in Gmund on Lake Tegernsee, which is where Ludwig Erhard was laid to rest after he died of heart failure in Bonn on May 5, 1977. After a state funeral on May 11, 1977 in the Plenary Hall of the German Bundestag, he was buried in the mountain cemetery in Gmund on May 12. From 1919 to 1922, Ludwig Erhard studied at the commercial college in Nuremberg, completing his studies with a degree in Business Administration. He subsequently studied Business, Political Economics, and Sociology at the University of Frankfurt am Main, and in 1925, earned his doctorate title Dr. rer. pol. with professor Franz Oppenheimer on the Nature and meaning of the unit of value.

From 1925 to 1928, he was executive in his parents’ business before becoming assistant lecturer at the Institut für Wirtschaftsbeobachtung der deutschen Fertigware, a marketing research institute at the commercial college in Nuremberg. Here, in 1935, Erhard organized Germany’s first marketing seminar. He remained at the institute until 1942, later becoming its Deputy Director.

In 1942, he established his own institute for consumer research, the Institut für Konsumforschung. On behalf of the Reichsgruppe Industrie (German Industry Group), he devoted himself to post-war economic planning, despite a ban to do so by Hitler. In 1944, he completed his memorandum Financing the war and consolidating debts. The content comprised considerations about the reconstruction of the economy after the war. Just a few months after the end of World War II, he left his post as an economic consultant for his home city of Fürth, and was appointed by the American Military Government to join the Bavarian Government – led by Prime Minister Wilhelm Hoegner of the Social Democratic Party of Germany (SPD) – as Bavarian Minister for Economic Affairs in October 1945. In 1947, he was entrusted with directing the expert commission Special Division Currency and Credit, who was to consult the finance department of the British-American Bizone administration on issues of the pending currency reform. In November 1947, he was also appointed as Honorary Professor for Political Economics at the Faculty of Political Science at the University of Munich by the Bavarian Minister of Education and Culture.

On 2 March 1948, at the suggestion of the Free Democratic Party (FDP), Ludwig Erhard was elected Director of the Department for Economics by the Bizonal Economic Council who put him in charge of economic policy. The Economic Council authorized him to go forward with his guiding principle act, which stipulated the deregulation of the controlled economy and prices, while introducing the new Deutsche Mark currency; this was a brave change in agenda and critical for the subsequent West German “economic miracle”. Initially, however, his economic policy was strongly disputed: The reforms led to high levels of inflation, which triggered a general strike of trade unions on 12 November 1948. His ideas were not confirmed until economic growth started at the beginning of the 1950s. 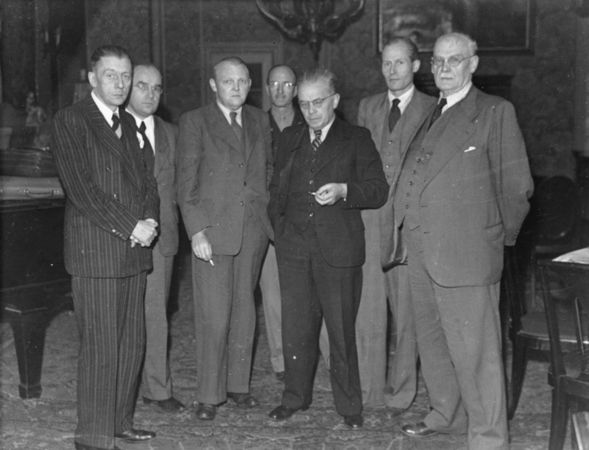 Interzonal Conference on September 11, 1946 in Frankfurt am Main: Consultation of the Secretaries of Commerce and experts of the British and American Zone, 3rd from left: Ludwig Erhard, Federal Secretary of Commerce
© ullstein bild - dpa

Ludwig Erhard, the man with the cigar, is the “father of the German economic miracle”. He sat in the German Bundestag for the Christian Democratic Union (CDU) for a total of 28 years, from 1949 to 1977.

As Federal Minister for Economic Affairs in the cabinet of Chancellor Konrad Adenauer, he shaped the economic boom of Germany over three and a half legislative periods (1949–1963). However, this entailed tough disputes with Konrad Adenauer, who criticized Erhard publicly, time and again. A bitter point of difference was the introduction of a pay-as-you-go, index-linked state pension scheme, which Adenauer enforced in 1957 despite warnings from his Minister of Economic Affairs and Minister of Finance, Fritz Schäffer of the Christian Social Union (CSU). Despite this, Erhard remained Federal Minister for Economic Affairs and was even appointed by Adenauer as Vice Chancellor in 1957. However, Erhard rejected Adenauer’s proposal of becoming the successor of Theodor Heuss as Federal President in 1959.

Some of Erhard’s well-known publications during his time as Federal Minister for Economic Affairs included Germany’s Return to the Global Market (1953), the programmatic work Prosperity for All (1957), and the book German Economic Policy (1962). 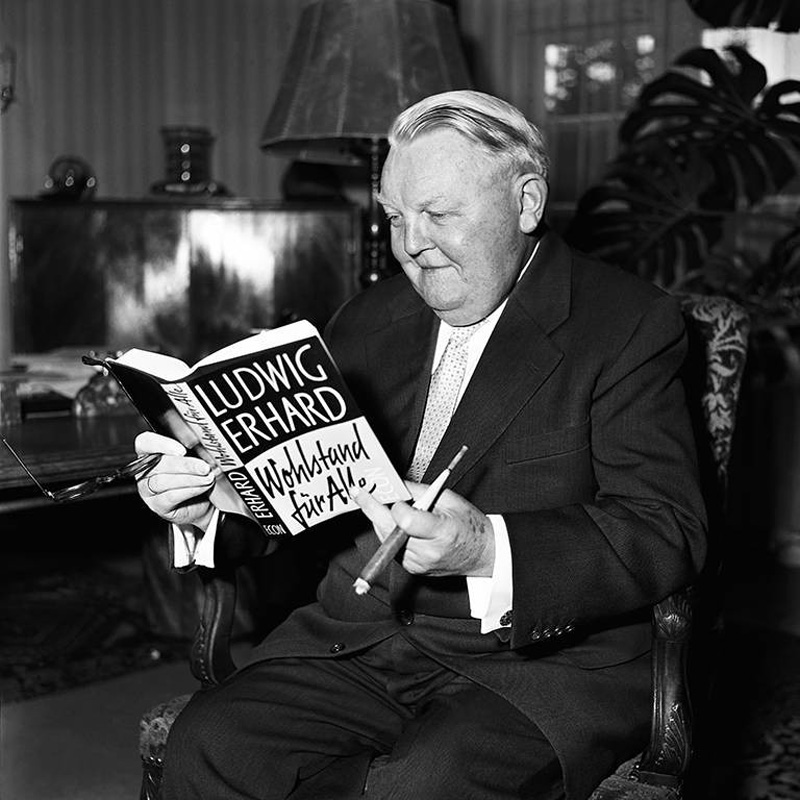 Ludwig Erhard, Federal Minister for Economic Affairs, with his programmatic work "Prosperity for All" (1957)
© Doris Adrian/Bundesregierung

Against the will and vote of Adenauer, the CDU/CSU Bundestag faction nominated Ludwig Erhard as a candidate for the chancellorship in April 1963. After Adenauer’s resignation in October, he became Federal Chancellor. Erhard's policy making was characterized by mediation and achieving common grounds of common understanding. He was oriented more strongly toward the alliance with the USA than a partnership with French president de Gaulles.

Konrad Adenauer remained his opponent within the party, joined by other CDU politicians who pressed forward to criticize his cooperative leadership behind the scenes. Despite a large, nationwide electoral success of the CDU/CSU in 1965 missing out closely on an absolute majority and his re-election as Federal Chancellor, Erhard succeeded increasingly less to assert his course. Nevertheless, he was still elected Chairman of the CDU in 1966. As a result of an emerging recession, the CDU subsequently suffered serious losses at a number of regional state elections. Erhard’s reputation as an economic expert appeared to be tarnished. In October 1966, the secretaries of the coalition partner Free Democratic Party (FDP) in Erhard's cabinet, led by Walter Scheel, resigned in protest against a planned tax rise. For a few weeks, Erhard acted as Chancellor of a minority cabinet.

The CDU/CSU Bundestag faction nominated Kurt Georg Kiesinger as a candidate for the chancellorship. On 1 December 1966, Ludwig Erhard resigned as Federal Chancellor, and in 1967, as Chairman of the CDU. In both offices, his successor was Kiesinger, who governed in a coalition with the SPD, the first grand coalition in the history of the Federal Republic. 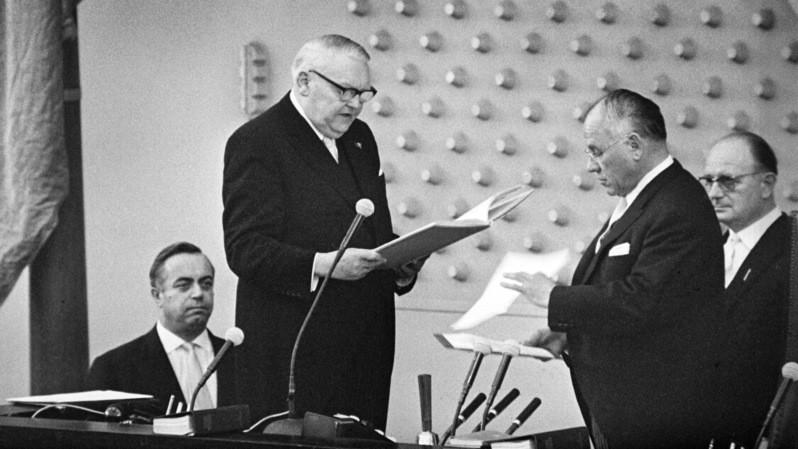 Swearing-in ceremony of Federal Chancellor Ludwig Erhard on 16.10.1963 in the Bundestag, at the right of the picture: President of the Bundestag Eugen Gerstenmaier
© picture alliance/dpa

After his service as Federal Chancellor, Ludwig Erhard remained a member of the German Bundestag for a further 11 years. In 1967, he founded the Ludwig-Erhard-Stiftung e.V. to embed his principles in economics and society on a permanent basis.

In February 1977, on his 80th birthday, Ludwig Erhard was commended with a number of honors as the “father of the German economic miracle”. Ludwig Erhard died on May 5, 1977. After a state funeral on May 11, 1977 in the Plenary Hall of the German Bundestag, he was buried in the mountain cemetery in Gmund on May 12. 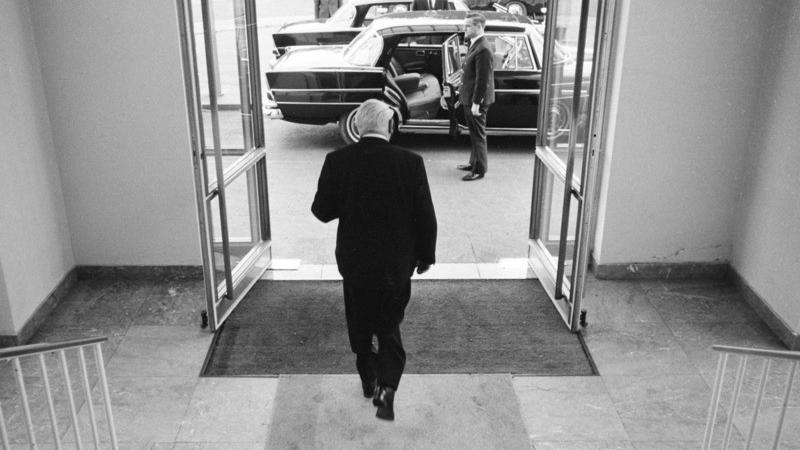